Skip to content
Home
Uncategorized
Why do dogs wag their tail?

Why do dogs wag their tail

Whether you own a dog or not, I’m sure you’ve heard this expression once in your life: “Dogs wag their tails because they’re happy”. Although that statement is not incorrect, it is not giving all the information necessary to know the real reason why a dog wags its tail.

Over the years, many experts in veterinary and animal psychology have been concerned with this issue, devoting thousands of studies to the investigation of canine behavior, and more specifically its tail. The result of all these investigations is very broad, but it could be summed up in a single idea that later we must develop to really know its scope: the movement of the tail of dogs, is directly related to the expression of their emotions.

The animal uses the tail as a means of expression, while reinforcing its message with other parts of the body, this being the most important and through which people can better deduce their emotions. As we have indicated, this idea is only a simple way to summarize everything that the tail movement in a dog entails.

That is why, below we will make a detailed list of all the possible meanings that this action can have, so that as owners of a dog we have much clearer how our pets communicate and eventually get to understand ourselves better with them.

Why do dogs wag their tail?

Before we begin to explain all the possible meanings of tail movement in a dog, we should know that apart from expressing emotions, this body part in dogs also has an essential mechanical function: balance.

The tail is not an accessory within the anatomy of dogs, nor is it an accident, it’s there for something. When the dogs are born they have only a few centimeters of tail, but already at birth this part is completely attached to the animal’s spine, being an extension of it.

Then, when they develop, the tail can measure up to 20 or 23 centimeters ( depending on the breed) and will be of great help in maintaining balance. In other words, it could be said that the tail of a dog, apart from being a transmitter of emotions, acts as a “cane”.

It is for this reason that their amputation is a serious mistake, as well as a crime, and may cause them great problems in both their structural development and their behaviour.

That said, we can already begin to list everything a dog can tell us by wagging his tail. But remember, it won’t be until two or three months of age when the dog consciously starts using its tail to express emotions.

This is the best known way for a dog to communicate and let you know that he is happy. The energetic tail movement, accompanied by jumping, barking and licking, is an expression of love.

It is certainly the scene that any dog owner has experienced when he returns home after work. The dogs greet us and let us know that they have missed us like this. And it is great. Check out our article here on 8 tips to keep your dog happy

When they are angry

While the dogs are usually in a very good mood, they can also get angry and their tail will act accordingly.

You will be able to observe that it moves the tail, but that it does not move energetically and much less making jumps of joy, but it will be very tense, serious and with dilated pupils. The tale in this situation will stand upright, showing discontent or anger over some recent event.

When the dogs have their tails up they are clearly on alert, hoping that something will happen as a result of some noise or gesture they may have noticed. In addition, this behavior is usually accompanied by a raising of the ears.

On the other hand, this posture is usually common when they run into dogs they don’t know or are with people they don’t trust.

A clear sign that the dog feels uncomfortable, afraid or even sad, is to observe that its tail is between its legs. In addition, this behavior is usually accompanied by nervousness, bristled hair and tremors. It is important to note that when the dog is scared, the most prevalent sign is to stick its tail between more legs and stay away.

Whenever we observe this behavior we should quickly look for the origin, as it is something uncommon in the usual behavior of a dog and it will be indicating that there is some kind of problem.

Of course, when dogs want to mate and make their traditional “courtship” to females, they also use their tail. But apart from doing it as a symptom of joy, the tail movement when you meet a puppy is totally instinctive and partly necessary for reproduction.

When they move their tail and butt energetically, all they’re doing is activating those glands, and therefore their smell. You could say that’s the odd way for dogs to put on perfume to flirt and find a girlfriend.

When dogs feel safe and calm, it is very common to observe that they lower their tail and barely move it. Yes, this time you will notice that the tail is not in tension, nor near the legs as it happens when they are afraid. In addition, this gesture will always be accompanied by a relaxed behavior, lying down or sitting next to us.

Once all these interpretations are explained, you will understand that by saying that a dog wags its tail because it is happy, it is not enough. In addition, it is as simple as stopping to watch your dog while it is alone or without any stimulus, to check that it does not move its tail.

This is because they basically have no one to communicate with. You will therefore be confirming once again that your tail is one of your main means of communication.

Check out this video here on why do dogs wag their tails. 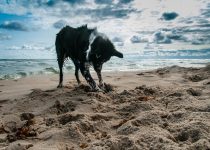 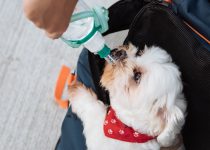 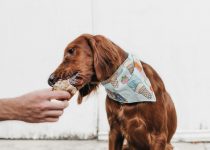