Skip to content
Home
Uncategorized
How to stop your dog digging.

How to stop your dog digging.

Does your dog dig in your garden? has your once manicured, pristine, Wimbledon tennis looking garden turned into a deathly ankle-twisting patch of annoyance? There are many reasons why they do this. Read on for some helpful tips on how to stop your dog digging.

So why does your dog dig?

there are many reasons your dog may dig in the garden. From boredom, instinct, to burying treasure. there is always a reason why they do this. the answer is recognizing why and putting a stop to it.

fun/natural instinct
they may just like to dig. digging may be the most amazing thing they have ever done and love doing it. This can be hard to stop simply because they like it so much. Or it may be an instinct especially in more hunter type breeds such as jack Russell.
one way may be to use a sandpit area. encourage them to dig in this area alone by hiding things for them to find. if they love to dig and you have exhausted efforts to stop them then this may be an easy solution for you and can contain the dig.

rodents/insects
are you aware of a rodent problem in your area? dogs will pick up on a scent and tend to go after it on impulse this may involve digging after something they catch a smell of. rats/mice often end up in our gardens no matter where you live so the fact they have been there will mean there is something they can catch a whiff off and be territorial, dogs wanna know who and why you’ve been there.

The same for insects, Theo sometimes used to catch sight of an insect and start digging after it. never catching it as his big paws would usually swipe it away in a load of mud he’s throwing around.

always make sure that you take steps not to invite these into your garden. don’t leave food scraps around for the dog outside. this includes throwing food on the ground for birds. make sure to buy an outside bin/trash can to store your waste bags of rubbish.

trying to get out of the garden
ah to escape means freedom. Being inquisitive creatures they want to know what’s on the outside of that fence. and this means getting out. so if they’re, not a jumping dog it usually means they will burrow their way out like its the Shawshank redemption. perhaps you have a natural escape artist on your hands. forever guarding the door when you open it, etc.

if your dog is digging near the fence you could combat this by putting heavier thicker plants by the borders. hedges and anything thick and bushy can make it harder for the dog to get nearer the fence. also rocks and stones. these are heavy and act as a great deterrent to stop your dog from getting underneath. Plastic chicken wire can be buried or set on top of the outlines of the garden. Make sure to use plastic. Metal chicken wire can and probably will end up cutting the paws when they dig.

release of energy
if your dog doesn’t get enough exercise. Then they will find their ways to burn the energy off. You may find that they will come to you to play, run around the house like an idiot or do something naughty. This includes digging. All the motion that goes into digging a hole means they can burn off a lot of that excess energy and make themselves tired.

try exercising your dog more. try different routes so there always new sites, smells and sounds. this will be a lot for the dog to take in and can tire them out some more. Also, try learning a new command or trick. mental activity can make dogs tired too.

looking for somewhere cool
on warmer days dogs will look for the cooler spots of shade. Finding cold patches of floor or laying in the stream of a breeze is heaven. Coupled with having a coat of all-over fur. This means that dogs will get hot very quickly and need to cool down.
By disturbing the topsoil they find cooler patches of ground to rest on or in. and when they figure this out they are prone to do it again. Always make sure your dog is hydrated. Check out our article here.

burying the treasure (bones)
dogs have an instinct to protect what they have. family, territory, and food. They often bury bones as an instinct. When food was scarce dogs used to go back to food they had previously buried to keep them going. A great way to survive. a handy snack supply if you think of it.
Don’t allow them to take food outside. Especially bones.this may include toys also if they prone to burying anything and everything.

looking for attention/boredom
If a dog craves attention it may go along the lines of causing trouble. Because they have learned that by doing something naughty they can get your attention. And then can get some sort of interaction with you. Albeit one when they re being told not to do something. Show your dog some attention. Make a point of showing attention and affection when they’re around.

When we first had Theo, our German shepherd. we had just sorted out the garden from a huge overgrown mess to 2 lovely sides of grass with a sunken path in the middle. simple but lovely.

Fast forward a year and a half and Theo had torn the garden to bits. You couldn’t even walk in the garden for fear of breaking an ankle. Or, falling into one of his digs. The number of holes he had dug meant that we had nowhere to put any garden furniture. Because there was no level ground to rest anything on.
And he loved it, he loved nothing more than getting his paws into the grass and mud and throwing it all behind him through his hind legs. He would bark round around and attack his chosen spot from all angles.

Theo was never ashamed or coy about doing it too. He knew he wasn’t allowed. But, he would joyfully run in the house covered in mud as if to say ” NICE, you should come and check out the mess I made, It’s great!”
making noises and getting his attention to stop would work for a short while. But once he had his sights set on it, any patch in the garden was gonna get attacked.

We exercised him more. Even if it was just an extra 20 minutes walk around the street. It would get some of that pent up hole digging out of him, and he would rather chill out. We included training and giving more attention when we could.
This went on for over a year, we changed the garden again with minimal grass. 2 meters squared for him to use the toilet but the rest went to paving slabs.
He stopped. That was enough or him to pack it in. We did have a few instances but he generally seemed to stop or grow out of it.

So, after a while, He didn’t dig his patch. And he loved the slabs because they were cool to lay on like the tile floors in the house. And I think that’s another reason he did it, so he would have somewhere cool to sit. But mostly he loved doing it. But he’s 6 now and he hasn’t done it in years. Thankfully!

I hope you enjoyed this article on how to stop your dog digging. Check out this video on a dog digging a huge hole in the garden. Maybe you can relate? 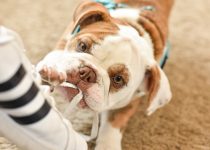 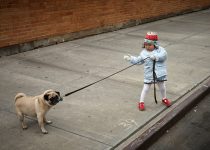 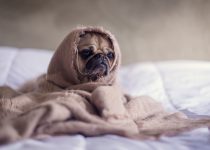